Grants from institutional donors now represent 45 per cent of War Child’s total programme funding. In 2016 War Child received funding from a range of institutions including:

USAID: USAID supports the research component of the programme Can't Wait to Learn.

Ministry of Foreign Affairs of the Netherlands (MoFA): War Child has a long-standing partnership with the Ministry of Foreign Affairs of the Netherlands (MoFA), which includes our participation in: a Strategic Partnership for Protracted Crisis to respond to the chronic lack of stability in the Great Lakes Region between 2014 and 2017; a partnership, with ZOA, in Addressing Root Causes of Conflict in the Democratic Republic of Congo to run from 2017 to 2021; membership of the Dutch Relief Alliance; a joint collaboration with Right to Play, the KNVB and UNICEF in Lebanon for the project Sport and Humanitarian Aid; and dialogue and participation in various geographical or thematic networks. The Ministry of Foreign Affairs of the Netherlands also supported the Conn@ct.Now alliance (with CHI, FPU and TNO) which enabled, among other things, the development of the innovative Can't Wait to Learn programme in Sudan, through the MFS II budget line.

Caritas Switzerland: War Child worked in partnership with Caritas Switzerland and Caritas Torit as part of the Girls Education project in South Sudan since 2014, funded by the Department for International Development of the UK Government. The aim of the project is to provide basic education services and to strengthen existing services in basic education and adult literacy and numeracy inside Eastern Equatoria State.

Global Affairs Canada: In 2014 the consortium formed by War Child and Mercy Corps was awarded a grant from the Department of Foreign Affairs, Trade and Development Canada (recently renamed Global Affairs Canada) for a project entitled ‘Protection and Education of Vulnerable Children and Youth in Colombia’. The project will have its mid-term evaluation in 2017, and is scheduled to finish in 2019. There is a high commitment across all parties to demonstrate positive impact and a strong working relationship.

EU/ECHO: War Child’s strong relationship with the European Union (EU) continued in 2016 with a total of eight grants from both the European Commission’s Humanitarian Aid and Civil Protection department (ECHO) as well as through local in-country EU delegations for projects in seven different countries.

Dutch Postcode Lottery: War Child has been able to reach thousands of additional children since 2000 thanks to annual contributions and structural support from the Dutch Postcode Lottery - the largest charity lottery in the Netherlands and the third-largest private charity donor in the world.

War Child received an annual structural contribution of €1.35 million from the Dutch Postcode Lottery in 2016. In addition, War Child was granted the Dreamfund for 'Can't Wait to Learn'. With a fantastic contribution by lottery ticket holders of €5.9 million, War Child is able to provide hundreds thousands of children affected by conflict in Sudan and Lebanon with access to quality primary level education. 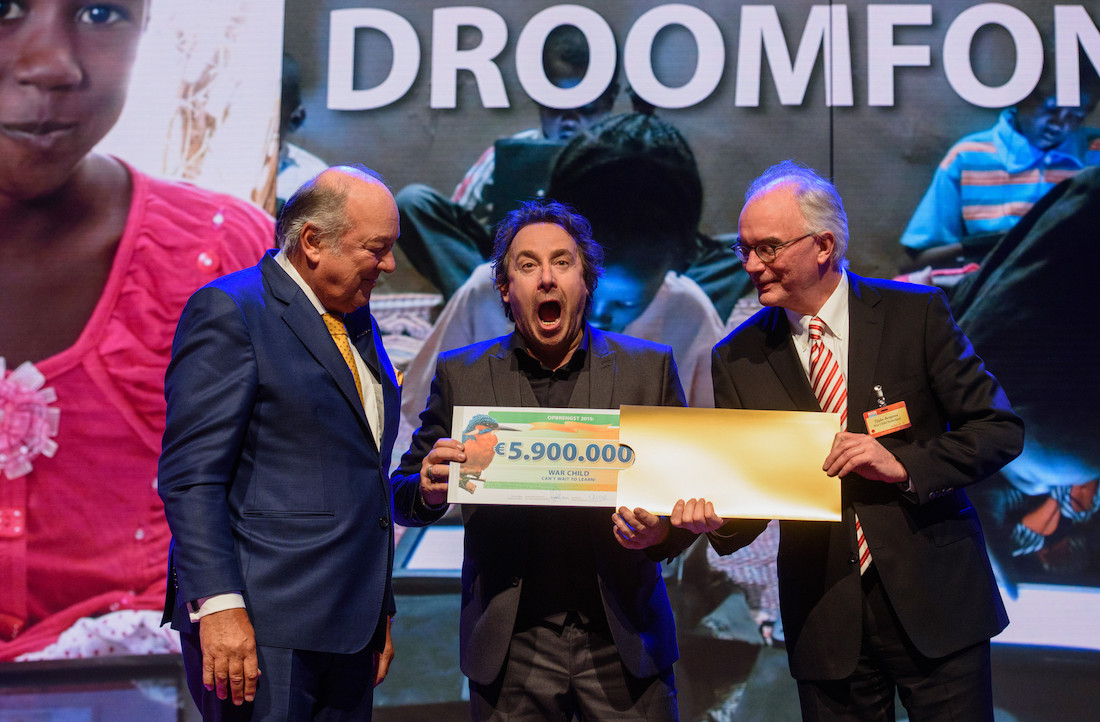 UNICEF: Our partnership with UNICEF continued in all our field operations during 2016 through participation in cluster meetings, technical collaboration as well as several funding arrangements. In Lebanon UNICEF supported War Child to meet the protection, education and psychosocial needs of Syrian refugee children and vulnerable school-age Lebanese children. UNICEF (Sudan and International office) strongly contributes to the innovative Can’t Wait to Learn project, designed to transform the way that education in emergencies is delivered.

1. Can’t Wait to Learn, an innovative technology-focused programme formulated to the address the huge educational challenges faced by children affected by conflict worldwide. IKEA Foundation supports the project in Sudan, Lebanon and Jordan.

2. Building Sustainable Futures, a project for children and young people in South Sudan which is jointly implemented with War Child Canada. The project employs a humanitarian response approach to reduce protection risks and improve psychosocial well-being through increased resilience and healthy development.

3. In 2016 IKEA Foundation selected War Child as one of their partners in their campaign for children. Time To Be A Child; Play, Learning and Child-Centred Development for Children Affected by the Syrian Crisis is a collaborative project between War Child Holland, War Child UK and War Child Canada and addresses the need to protect Syrian and vulnerable Jordanian and Lebanese children from abuse, exploitation, violence and provide them with skills and resources to foster their resilience and healthy development.

In 2016 War Child passed the evaluation procedure to be able to access this funding in Colombia and South Sudan. As a result, War Child, together with local partner organisation Corporacion Halú, was awarded the first country-specific "fast-flex" project. For South Sudan, negotiations are still ongoing.