War Child takes its responsibilities with regard to transparency very seriously. We work hard to provide our external stakeholders such as donors and supporters with clear and complete information about our overall performance within a wide variety of contexts - not only our work in programme countries but also our governance policies.

A Materiality Analysis forms the logical starting point for the reporting activities of War Child. The analysis offers the reader an insight in which themes are relevant to the organisation and allows them to understand why certain themes are discussed in more detail than others.

The next step in this process was to measure the nature and scale of the impact of each of the selected themes for War Child and its stakeholders. It was concluded, among other things, that the topics identified as important by our stakeholders largely corresponded with the key themes that the organisation is pursuing.

One such emerging trend is Urban Violence. A majority of the world population - more than 50 per cent - lives in urban areas. However, the lack of opportunity in these areas and increasing criminality also lead to an increasing number of conflicts in such areas, now leading to the fact that more people die in urban conflict than in traditional armed conflicts (the ‘war on drugs’ and ‘war on gangs’). We are currently working on various existing and new initiatives within the context of this theme. These initiatives are also covered in this Annual Report.

The eleven themes identified as most relevant served as the guideline in the process of determining the content of the Annual Report.

The process of identification saw 30 topics selected from a longlist of more than 250 non-financial topics by means of a desk study. The focus of the desk study was to identify the topics on which War Child and its peers currently report and the expectations of the PricewaterhouseCoopers (PwC) Transparency Award.

Based on a digital survey, the stakeholders assessed various themes according to relevance. This stakeholder input led to the selection of the eleven most relevant themes. 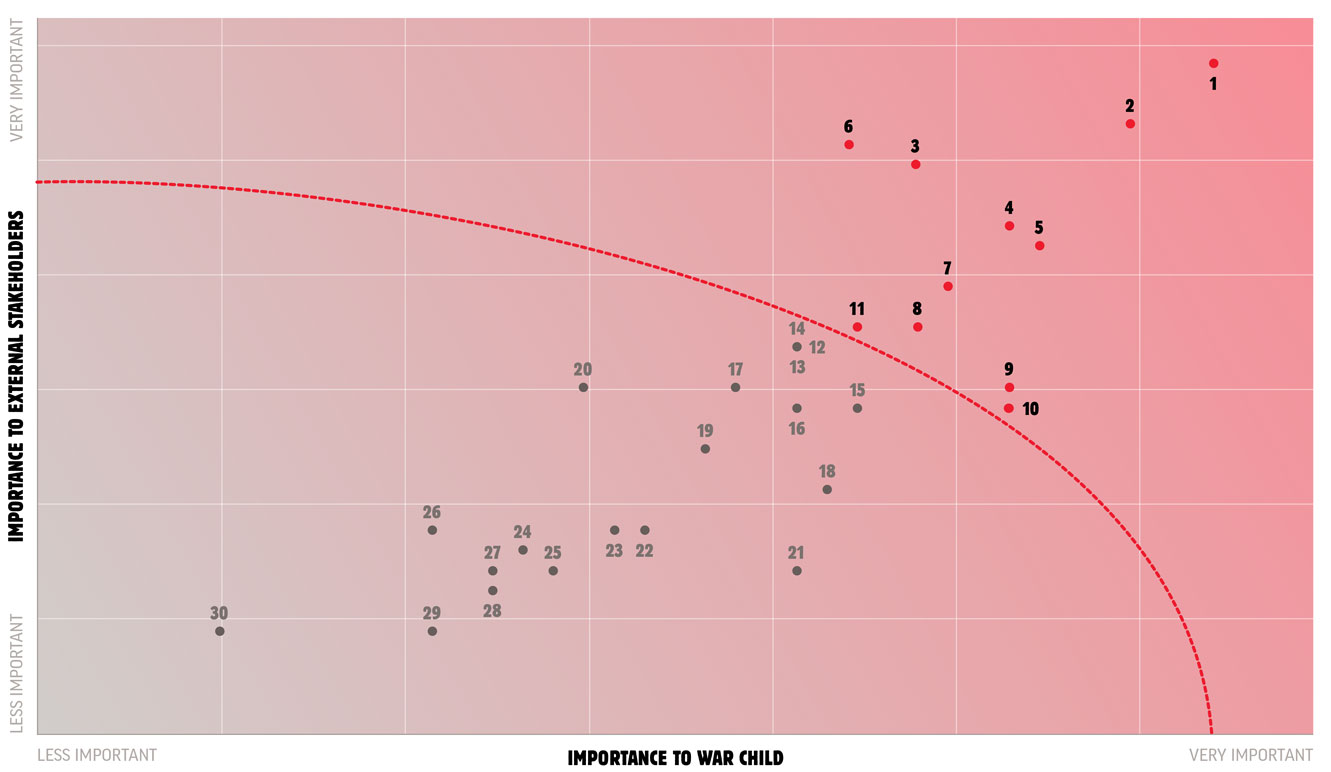 1-11  These are the eleven themes in the materiality matrix that are perceived as important by a large group of stakeholders. These themes are addressed at length in the annual report.

12-23   These are themes that, as perceived by a broad group of stakeholders, have less priority. This section encompasses themes that are relevant to certain stakeholders for operational reasons or must be reported on for compliance purposes.

24-30 These are themes that are of lesser priority to most stakeholders and have a less significant impact upon the organisation.

The materiality of topics as determined by the Management Team provides the basis for the content and design of the Annual Report. This process determines how each topic is covered and how they are incorporated in the information gathering process.

Our stakeholders attach great value to transparency - and so do we. We asked for their input and this input formed the basis of the materiality chart featured above.

War Child works towards to the standards and benchmarks of the International Aid Transparency Initiative (IATI) with regard to issues of transparency.